It’s 2014 and you’d think we’d be done with all this feminist nonsense. And yet, a woman standing up for herself in any which way is deemed feminist, which is viewed as the antithesis of being feminine. And with that comes a bucketload of taboo EMOTIONS. Lord, not the female emotions! (Cue every woman’s favourite question: Is it that time of the month?) 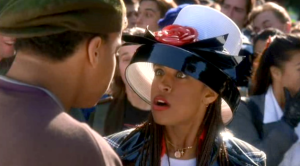 I’ve had my fair share of calling women crazy (yes, there are many blogs, shut up, what are you, my record-keeper?). I recently read an article about “gaslighting” and labelling women as crazy is an amazing way to completely discredit their feelings. I guarantee that every woman has been considered an “over-reactor” or “over-thinker” at one point in their lives. I can also guarantee that they’ve been told to “calm down” or “relax” by a man. Which by the way, we all love. It completely calms us down and doesn’t make us want to rip your balls off in any which way.

You know why? Because you have just condescendingly told us that you are in control. Of both your “feelings” and the situation – and are therefore more rational – and subsequently more right. That is not always the case. Just because we have emotions does not mean that we are wrong. And what’s the opposite end of the spectrum? We’re cold. Yipee! We get to be over-emotional basket cases or cold fish! Which do I want to be today?!

Don’t get me wrong. There are some batshit crazy women out there -but I’ve come to realise that they are really a product of their background and experiences. For example, if a man decides he just wants to be in a sexual relationship with a woman but doesn’t tell her the truth and she starts to behave in an opposite manner, she becomes “crazy’. I’ve always thought Glenn Close’s character in Fatal Attraction was misrepresented (ok, up to the boiling rabbits and attempted murder). Why was she wrong to get upset at someone who used her and wanted to lose her?

So here’s what I have to say: It’s ok to have emotions, it’s ok to feel them and it’s ok to express them. Anybody (male or female) who tries to discredit them by asking you to “calm down” or calling you “crazy” is essentially bullying you to cave and back down. It is a form of manipulation. I think it’s very sad for a woman to not feel free to express herself for fear of being judged as “crazy”.

I also kinda feel bad for calling some men crazy. They were just being emotional – which is also considered taboo for them. I sometimes call it “Man-opause”. My bad, dudes. My bad.

When Women Get Bullied At Work

I am fortunate to be surrounded by many strong women – both personally and professionally. Most of them are in upper management levels and doing a great job of being leaders. And yet, the common gripe is being taken advantage of by a male boss – not sexually, but work-wise. Almost all of them have a male boss that either overloads work and takes credit, or flat out bullied in situations to get more work done for less or for free. As a freelancer with both male and female clients, I can confidently say, no female client has ever tried to ask me for freebies or bully me into giving them more than was pre-arranged.

Coincidence? You tell me.