I have, what you might call, an over-indulgent pensiveness. Ok fuck it, I’m an over-thinker. I know everyone thinks they’re an over-thinker, but mine has scaled to new heights of complete lunacy. I have recently come to accept (I acknowledged this years ago…) that I am a person of EXCESS. I believe this to be a direct result of years of forced repression of emotions. I considered the showing of emotions in front of anyone to be sign of weakness. I have never been the girl who gently rests her sobbing head on her boyfriend’s shoulder, while being nestled in the manliness of manly strength.

In fact, it’s been quite the opposite. I have never cried or thrown up in front of a boyfriend before. Yes, I know how absolutely ridiculous this sounds. I used to be proud of this fact, like I won some  Cold Fish of the Year Award and received a years supply of frozen cod (mmm cod). In recent years, these repressed emotions have burst forth – in the most irrational and incomprehensible ways – I can’t even use PMS to cover up this shit.

Every girl over-thinks a little. If you don’t, I don’t wanna hear about it, keep that serenity shit to yourself. It usually involves a boy and ranges from mild “I wonder why he hasn’t called me” to spicy “That asshole is dicking someone else, I know it!”. Now, that’s not the over-thinking part, that’s just regular thinking. This is a sample of my train of thought, using that simple fictional example. 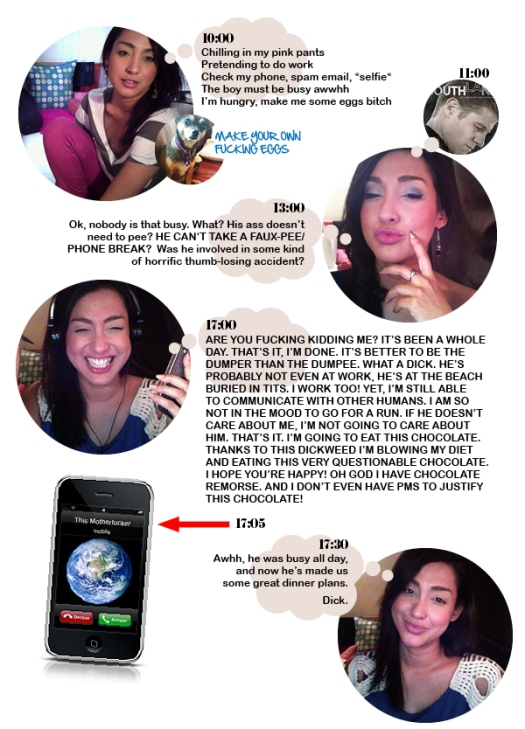 So, over the course of the day, I basically start off as your typical lazy freelancer and swell into some kind of Demon-Female-Hellhound of over-thinking and assumptions. I know this is crazy. Some people have suggested yoga. I tried yoga. I over-thought yoga. Here’s that diagram.

Needless to say, yoga did nothing to stop my over-thinking.

I am openly admitting my problem, my flaw, and am ready to embrace change and make an active attempt to relieve myself (and everyone around me) of this horrendous bad habit. I’m open to suggestions – as long as it doesn’t involve:

I’ve been told that’s something you can switch off, but I am literally in the dark, fumbling around for that alleged switch. Help an over-thinking, over-reacting, insomniac-suffering, sister out.